Yesterday I drove up into the hills of the Peak District on a “morbid mission”. That mission was to find the gravestones of a few Gregory’s who might help fill a few gaps in my family tree research.

So my first stop was the village of Winster, despite knowing where Winster was, and having driven through it once, I had never actually visited it. I found the churchyard easily enough after driving through a village that has history etched on it’s face.

I was pleased to see that the churchyard had lots of old graves, in so many churchyards the gravestones have been leveled if unclaimed by the living. This was not the case here, furthermore the cemetery was very well kept. I felt quite nervous to be honest, although I had to walk through a graveyard on my way to school in tediously, I never lingered, I never got up close to the gravestones to really read the inscription, I never took photos of the graves. It felt quite wrong.

I had to talk aloud in case I needed to get permission from the spirits, who if there, were probable wondering who on earth this strange black man was,  and why he was wandering in between and sometimes, if only accidentally “across” their graves. (weird I know).

I found a few Gregory’s quite quickly, and then went on the hunt for more, older ones.
Again I spoke out loads, “Come on Gregory’s give me a sign”. Call me superstitious, but I was drawn to start looking in an area 10 feet in front of where I was. Lo and behold, the first inscription I looked at read “GREGORY”.

I think I found about 6 or 7 Gregory stones there, but with time on the wane, I decided I had to get up to Elton because I had older traces of Gregory’s there.

Elton is another place I had never been to before either, I mean honestly I cant think of any reason why I would have been there.  It’s very tucked away, very remote, yet set in a beautifully peaceful location. Unless you knew it was there, its not a place you would just stumble across, as it isn’t near any main roads.

The Churchyard there was bang in the centre of the village, and there was a lot more people walking around, I didn’t feel quite so apprehensive about being in there.

Again I quickly found some Gregory graves. Interesting ones too. I also had a nice breakthrough, in that I found some Wallwin Graves. Now Helen or Helena Wallwin of Elton was the wife of the oldest discovered ancestor James (Jacobus) Gregory of Birchover b 1670.

These Wallwin Graves were some 100 years later though, a quick glance in the phone book earlier that day had revealed only one Wallwin listed…and living in Belper.
I’m annoyed that I didn’t photograph the Wallwin graves, but hey, that’s a job for another day.

Then I went on to Youlgrave, I was conscious that the light was fading fast, I wasn’t even sure if I would make it to Youlgrave in time, let alone Birchover and Stanton.

I did make it to Youlgrave though, and although I have been there many times before it seemed much smaller than I remembered. Youlgrave churchyard, to which I had previously paid no attention whatsoever, was much fuller than I had imagined.

Unlike Tideswell, where the graves have been “thinned out”, a lot of the older stones were still standing. They really were magnificent too. There was a chap there assessing the site to make a film, all I can say is, what an excellently creepy location. As you will see from the photos I took Youlgrave Churchyard has a special quality. 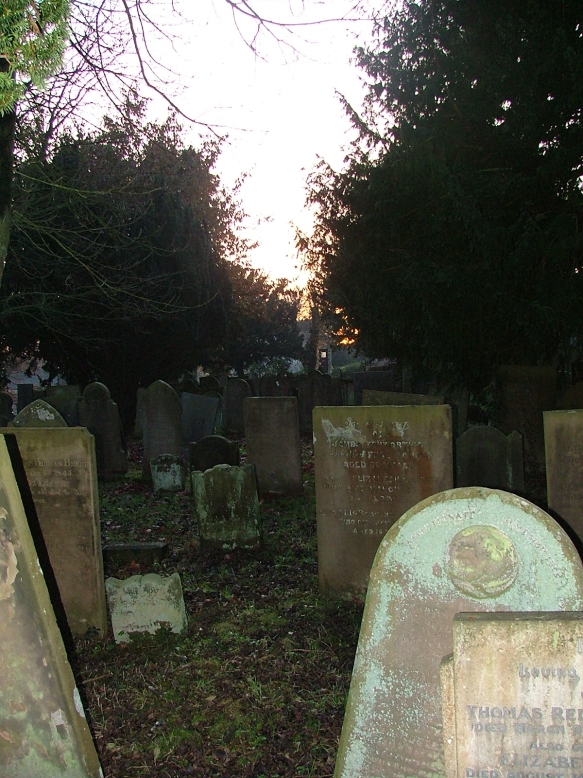 I pretty much drew a blank here, as I only managed to find one Gregory Grave. I know there are more, but I didn’t give myself enough time to look properly. *(2014 -years later, I found a whole load of Gregory Graves, just a few feet from where I was standing) I know that James and Hellen’s son William and his wife Hannah are certainly buried here. Probably some of their kids too. Again though, that’s another expedition.

If anyone should have any information on the Gregory family, or perhaps you are a Gregory…Please feel free to leave a comment.

Browse some of my Photos of Youlgreave Church on Google +

2 thoughts on “Gregory’s of Youlgrave, Birchover,Stanton,Winster and Elton”