I took a drive up to Cutthorpe nr Chesterfield yesterday, I was planning to meet up with my old school mate Matt Bradshaw, I hadn’t seen him in 5 years. We had arranged by phone to meet at the “Gate” Pub, he said it had been something of a tradition for years for him an a few mates to go there and have a few post Christmas bevvies.

I hadn’t been to Cutthorpe for years since the days of the First Drop inn, in fact. When we Tidzerites met a few Cuthorpians and became friends. Anyway I arrived at the gae o find up packed out with blokes of about my own age. Matt had Paul Skinner with him, another old friend from school and we started to catchup on old times and share news of our work and families.

Matt explained to me that these other guys, who he seemed to have a loose association with, were called the “Jolly boys”. somehow he had fallen into their company several years ago and had been coming to the gate for annual revelry ever since.

The “Jolly Boys” are basically a boys drinking gang who celebrate friendship. I followed them all outside for the initiation ceremony where the “virgins” have to down a pint of blended nastiness consisting of several different alcoholic shots and random vegetables. One brave chap even stepped up to the mark wearing a Green dayglo Mankini. Classy!

Whilst outside I, like everyone else, had a a piece of paper hurriedly pressed into my hand, on which was printed my line in the communal song “Chicago”. Chicago is just one of many drinking songs that followed. It was all great fun and everyone made me feel welcome. Whilst standing at the bar, a young fellow came up to me and asked where I was from, I told him Tideswell and he told me that he used to live there too.
I knew who he was, Glenn Evans, I told him I had clear memories of his Brother, Richard, who our old (Mr Black) Teacher used to call “Darth” on account of his mad love for Star Wars. Glenn told me Richard was in the Jollyboys too, and was right behind me.
Would you believe it, I haven’t seen these two since we were all boys of about 8 or 9 years old, and yet quite by chance, in a pub on a hill miles from home we all meet and remember each other, Priceless. 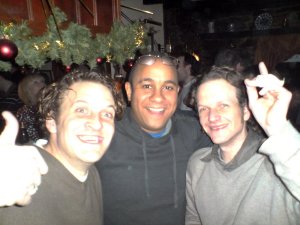 After a more drinks and jigging around to Guns n Roses, it was time for the annual Trek, both Paul and Matt advised me to change my coat, as I had my cashmere overcoat on, but I didn’t have another, so that was that. We started walking down the road and then across the fields and Lineker Woods. The fields were wet and sludgy and my suede shows were soon on the road to ruin. we had a quick walk through the woodland paths, heading towards old Brampton, and the pub there where legend had it a buffet was waiting for us.

This was where it all got a bit messy cos, Matt, Skin and I decided to go “Bush” we wandered off through the woods and up into a filed, we worked out that we were some way off the main pack and tried to head back to them, but found a steep sided valley blocking our way, we slipped and slow down it to the muddy steam at the bottom, after clearing that we tried to get up the other side, think “Gladiators travelator” crossed with “it’s a knockout”. It was extremely hard to get up and we had to work up a sweat just to get to the top, at this point we were rescued by an original Jollyboy who had checked back to find out where we were. Within minutes we were in the pub and enjoying the remains of the buffet, Awesome!

Thanks to Paul and his missus for the lift home, and to Matt and his good lady Rach, for their hospitality and kindness yesterday.

Looking forward to next year already.