Stoney Middleton Fell Race 2014 was the third race that I have missed through injury.
I can also say that whilst I’m gutted about not being able to run at the moment, I’m secretly happy that I didn’t have to run in the 30+ degree heat that we’ve been having this summer.

Whenever I’m not running, and can get to the race to support Tideswell RC, I take my camera along and try to snap team member and other runners in action. Sharing is caring and all that.

The Mother of all Hills

I thought I’d check out the route before the race kicked off, as I wasn’t familiar with the route and fancied finding a good vantage point to take pictures.

The route looks fairly gentle, to begin with, that is until you hit Stoney Middleton “High St”, I’m sure it got its name because, well, it’s high, very bloody high.

Cheers to Drew Hand for the map.

My little car found it tough going so Bing a frail human being huffing and puffing up it in the beating sun would be pretty tough going.

The race itself started on Stoney Middleton playing fields. All the runners started arriving and there were plenty of running clubs represented. The ones I knew were,

A few of the teams were kind enough to let me take pics of them before the race. 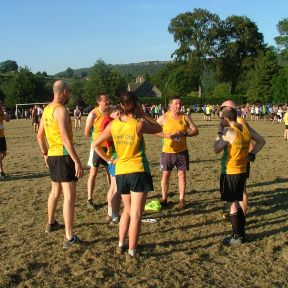 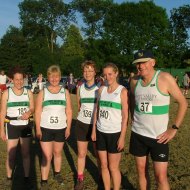 The Race got underway from between the football goalposts.

A quick loop up the length of the field and down to the style to exit the field. Runners started off quick, to be first over the stile and to get a bit of a start for that hill. 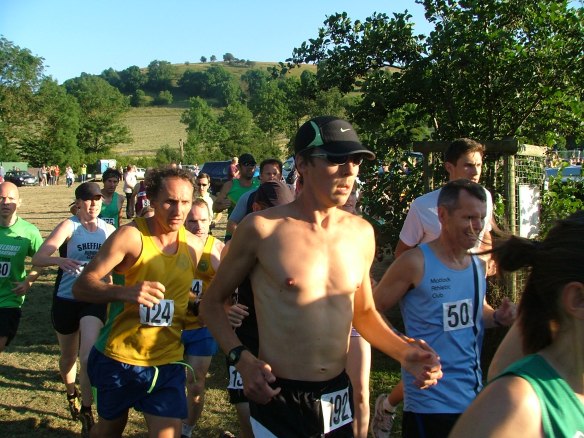 Due to the high number of runners though, the race was at a standstill within a minute as there was a near instant bottleneck at the narrow stile.

This part was the only negative for me, but these things happen, and without issues like this, races would have nothing to improve on in coming years.

Within minutes, all the runners were off up the main road and heading toward “The Hill of Doom”. God pity their souls.

Being crocked, I wandered up the path and over the nearby fields to find a couple of decent vantage points for photos. Eventually, I settled on a nice spot down in a cool Valley just before the runners had their final ascent. I had a friendly marshal for company, and proceeded to prattle away to her whilst we waited for the pack to arrive.

Sadly, the pics were not the best, I must have had the camera on the wrong setting, but they are passable. So here they are.

All pics are free to use and download but do please credit me “Tideswellman” by linking back to this post.

* All the photos can be found on my flickr Gallery here.